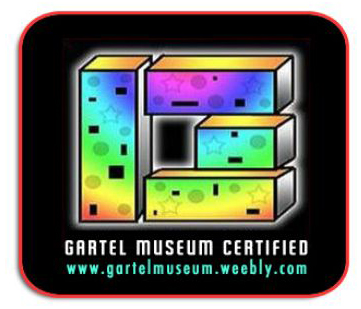 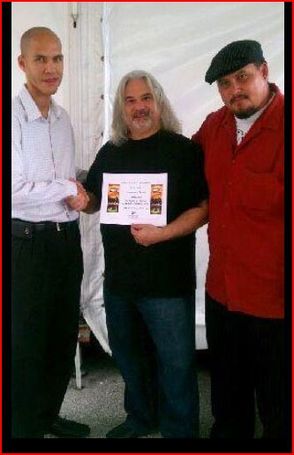 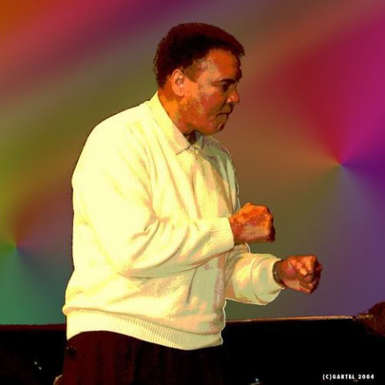 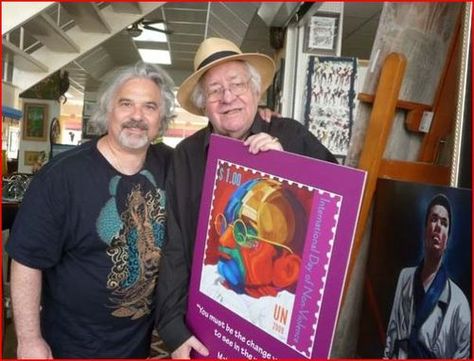 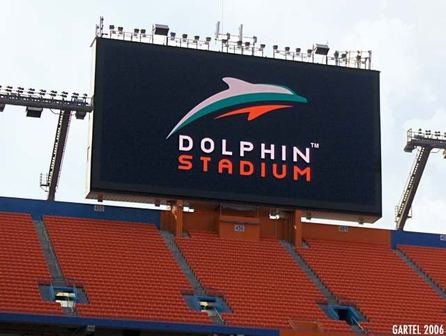 Take me out to the ball game

Remember the days when you went to a stadium and you actually went to see the GAME?
Today people go for the free gifts, the corporate snacks (Dunkin Donuts) the solicitations, the free bath towel with every subscription to the local paper, free driving gloves if you sign up with the right car insurance, and on and on. Then there is the DJ in the corner, the dancing girls, the t-shirts shot out of air guns, the intermission super dynamic, over the top extreme team ball players, the intermission dunk contest, the throwing contest, the running contest, the dancing girls (oooh I mentioned them already) Well that was for the first quarter then they come out again during time outs etc. Now at Dolphin Stadium people are going to see the largest LCD Flat Panel Monitors in the world produced by Daxtronics.

I was invited by the CEO of the Dolphins Joe Bailey to have a day at the Stadium to celebrate the introduction of the new screens and to go behind the scenes of the Stadium itself. (locker rooms included) Definitely a treat for any Dolphin fan. Afterwards Joe and his wife Charlotte took me for one of the best dinners Ive had to date, living in South Florida. I certainly had the best mojitos as well. Man was I plastered after all that. Food can be very sensual and indulging. Specially with rich chocolate cake following. I also had the chance to shake hands with Joe's boss the 1 man Wayne Heizinger. I have to say to shake the hand of a billionaire before he jumped into his private helicopter was pretty special. His hand felt the same but I swore it was a ton greener than mine! - Good times had by all. Those LCD screens are just amazing! -)

In 1993 The Phoenix Suns commissioned me to create a poster for their team. At the time their star was Dan Majerle. He was indeed a great player. To my surprise he later moved and played for the Miami Heat. Just perfect. Right where I was moving to. Dan loved the poster I did so much for the Suns that he commissioned me to do one for his restaurant: Majerle's Sports Grill. I will be posting that image as well some time in this blog. In the meantime, have a look at the Phoenix Suns artwork. 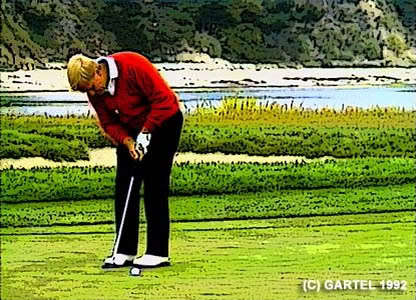 Here's to trinities. I mentioned Dolphin Stadium for football, last blog mentions my commission for the NBA Championship Spurs, now here is a work from the US OPEN I was commissioned to create for Golf Illustrated Magazine back in 1992. What makes this a big deal? For one thing it was the very first time a digital camera was ever used to photograph the US Open. It very well may be the first sporting event EVER that was shot with a digital camera. Everyone on the field was using their usual giant Canon EOS cameras with super long telephoto lenses. I came along with the Canon 760 still video camera that took video floppy disks which held only 25 pictures. The resolution was only 640x480 producing a 900K file. (not even a megabyte.) People thought I was absolutely crazy. Never before did they see such images. I was using Photoshop 2.0 at the time along with Aldus filters. I also used EFI (Effects For Imaging) to make the final changes for color, saturation, midtone, highlight, and shadow compensation. What I love is how people have all this calibration software when in true fact EFI in 1990 was plenty enough to make a perfect print. People today have been sold a bill of goods on what they really need. But thats for them to figure out. This is a story of being on the golf course and running back to my hotel room and loading up all the pictures with the FV-540 video floppy disk drive that looked like a bread basket and weighed something like 5 lbs. Yes. It was totally possible to "send" a picture over a modem but it would take about 10 minutes to do so for each picture over a 1440 baud modem. Ohhh remember those days? Thank goodness for the Desert Storm War, the training ground for all future imaging technology and potentials. They learned a lot from that experience. Hence I was one of the few civilians to have this camera. My friend Elmo Sapwater was the only other person I knew who had this camera. We never discussed how each of us acquired the camera. It was very confidential. (Still is.)

The US Open was the second stop on the PGA Tour. I actually first shot The Tradition in Carefree, Arizona first, which was part of the senior tour. That was a ton of fun and so was the after party at Eustice Payne's house. There were security guys with guns protecting the house and the people in it. People like Hall of Famer Johnny Bench were present along with the Van Ardsdale brothers who at that time were couching the Phoenix Suns. (Makes sense as we were in Phoenix territory.) I can recall elbowing Lee Trevino to get to the bowl of shrimp that were the size of my fist. I realized right then and there that these guys live some life. Traveling to the most gorgeous places on earth, playing golf, viewing the most marvelous scenery, and eating the most exotic and scrumptious food on the face of the earth. How these guys weren't as fat as houses, still to this day I wonder. They must seriously work out. The amount of indulgence was unbelieveable to partake in.

The US Open was full of major golfers as you can imagine. I photographed them all. The picture of Jack I am posting with this blog is a classic. The "Golden Bear" in a classic stance. You just have to love it. I'll post the winner of this match eventually as it is a great work of art. However, Jack is Jack. Legends are beautiful people.

(c)2000-2012, Laurence Gartel; All Rights Reserved
All graphic & photographic Material. Use with explicit permission only.