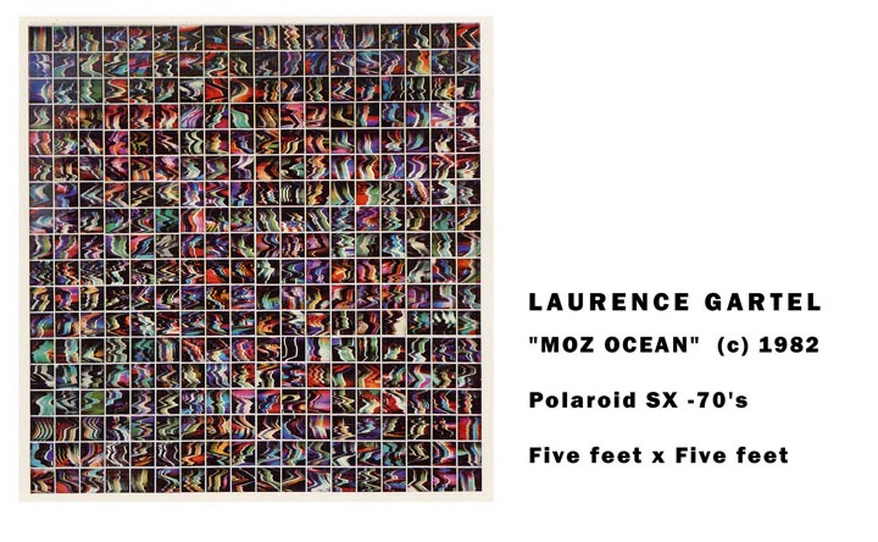 Nov. 8, 2011
In the early '80s, Gartel began his illustrious multimedia career tweaking the magic of Polaroid's instant images, turning them into fine art murals that showed in world famous museums and in Polaroid's own permanent collection. Today, he is excited that his former sponsor, Polaroid just released a 14-Meg digital camera that continues the tradition of instant imaging.
Preparation for Photographic Museum. Polaroid SX-70 Mural. Photograph by Wayne Becker (c) 2009

"MOZ OCEAN" (above) is considered the cornerstone of the computer art movement. In 1982 GARTEL first showed showed his prominent piece, “Moz Ocean” consisting of 324 Individual SX-70s which he photographed off the video monitor. At that time, there was no saved software nor hard drives to capture the images he produced. “Moz Ocean” has since shown at major museums including Museum of Modern Art (MOMA) in New York, 1989; "MOZ OCEAN" part of the solo museum exhibition at the Fine Art Museum of Long Island, titled, "Laurence Gartel: A Cybernetic Romance", Norton Museum in West Palm Beach, Masur Museum in Monroe. In addition, the last of the POLAROID MURAL series, which date back to the mid 80s, was shown as well. These special mosaic polaroids have never been seen together. ("Moz Ocean" was last appraised at $875,000). In addition, in 1990 his Polaroid installation titled “Moz Ocean” was exhibition with the Museum of Modern Art (MOMA) in New York City. Gartel has exhibited in many other renowned institutions all over the world, including the permanent Polaroid collection. As a result, other artists such as Andy Warhol enlisted Gartel to teach him how to operate the Amiga Computer while he was creating an album cover for Debbie Harry (Blondie). The release of Polaroid's new 14-Meg digital camera makes everything old new and timely yet again, as Gartel continues to pioneer the future of digital multimedia, fusing the worlds of pop culture, music and fine art.

Available Today, The New Polaroid Z340 Instant Digital Camera Reinvents Instant Photography for the Digital Age, Marrying the Flexibility and Convenience of a Digital Camera with the Classic Polaroid Instant Experience: MINNEAPOLIS, MN, Today Polaroid announced the Z340 Instant Digital Camera, the next step in the evolution of the famed instant camera.  Featuring a full-function 14.0 megapixel digital camera and integrated ZINK® printer, the Polaroid Z340 camera delivers a new twist on the instant experience. The Polaroid Z340 camera allows users to customize each individual photo between snap and share - making the newest product from the Polaroid family a digital photo booth that turns your images into a new social currency in less than one minute.

Since the launch of the Polaroid Land Camera in 1948, the first instant camera, people around the world have enjoyed the magic of Polaroid instant photography. The Polaroid Z340 camera delivers the same instant experience that is synonymous with the Polaroid brand: a simple, quick and easy way to capture, print, share and create with snapshots from our lives. Unlike any other camera available today, the Polaroid Z340 pays homage to its analog predecessors, yet contains an advanced, easy-to-use digital feature set. Designed for portability, the Z340 combines a 14.0 megapixel digital camera with a ZINK-enabled printer using the ink-free Zero Ink Printing Technology from ZINK Imaging to deliver a 3x4'' print - the same size as the classic Polaroid photos that captured millions of special memories over the past 63 years. The Polaroid Z340 camera gives you even more options for instant printing: choose the iconic Polaroid Classic Border Logo or full bleed and contemporary 3x4'' photos. More - http://www.polaroid.com/en/press/2011/11/8/polaroid-announces-z340-instant-digital-camera-ava 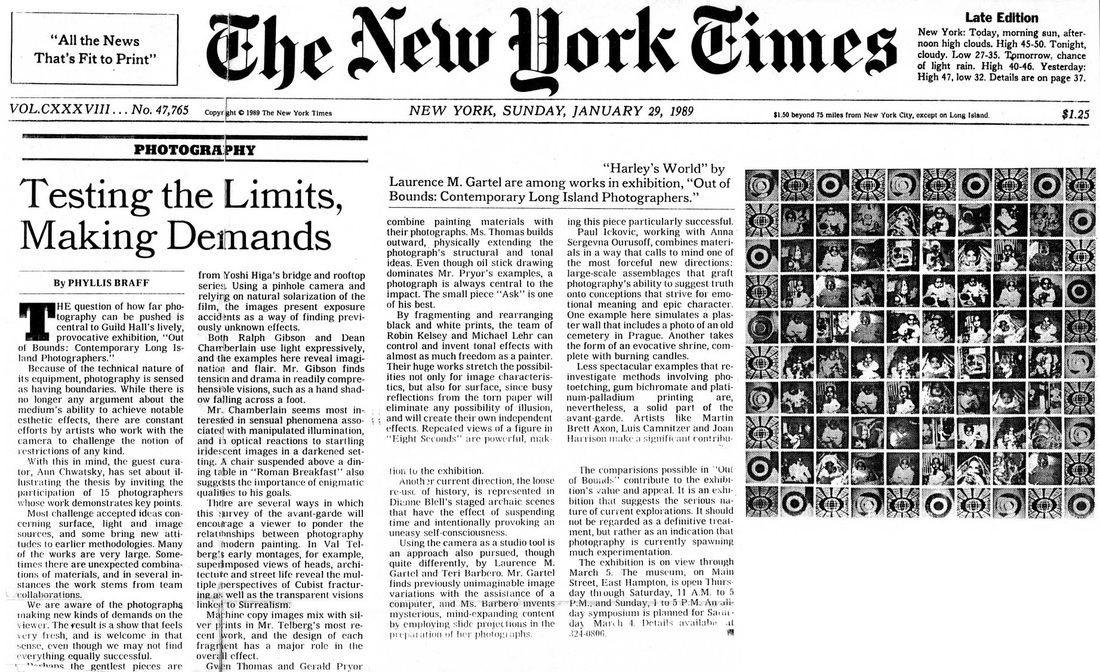 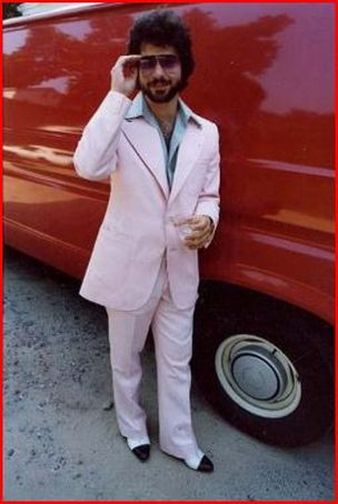 Gartel's hand-manipulated Polaroid photographs: Of the shots below is by artist Alan Plotkin (who I can still see in his white shirt in my mind's eye; a tall skinny guy with a decent sense of humor.) Alan was out in California on a corporate gig,  and admired my work as a "real" artist vs. someone trying to make a living doing other things. My approach was never to sell out, and always make great art in my own style where my own heart takes me.

I was 24 at the time when I first headed out to California. I went to use the Ampex AVA system to make the first high resolution markings on a serious computer system. In order to do that I had to get myself out to California first. There was a company called Image Works and they were looking for photographers. I figured it was the best way to get to Redwood City where Ampex Corporation was, and so I agreed to go out for the interview. There I met my friend Michael Stern (whom I remained friends with every since) and Alan Plotkin. I recall Alan being a great juggler as well. Good guy to bring to a party.

The second Polaroid titled, "Captain Video" was made by Wayne Stotts and the image is dated 12/79. Wayne owned a gallery which he opened in Pt. Washington by the water. It was an absolutely gorgeous location. I can recall the coat I was wearing (I could probably get one arm into it now..) but my dad bought me that reversible coat at Saks Fifth Avenue's Mens Fur Department. It was a jacket made out of "Flying Squirrel." I never saw a squirrel fly, but that is what they called it. Wayne must have liked my coat as well, otherwise he would have never have worked on the picture.

Polaroids were "worked" on at the time. People manipulated the emulsion and moved it around and almost painted with it in a way. But they would use all sorts of sticks and tools to get certain textures and techniques to the image. It was truly one of the first ways to alter a picture in an expedient manner. Little artworks in a 4" x 4" format.

But the image was only one part of the story regarding Wayne. Who was Wayne anyway? For curiosity sake, I just looked up Wayne on the internet and there he was: A graduate from one of my schools SUNY at Buffalo, Wayne continues to be part of the computer business. I think he was a business man in this field even all the way back to 1979. As it turns out, Wayne's brother Richie was the lead guitarist for Wendy O' William's group the Plasmatics. Richie was the 6'6' guy cross-dressed in a nurses outfit along with a shaved head and a yellow mohawk. (It was so bright you just can't call it blonde.) Nobody called it "cross-dressing" either. It was just outrageous and cool. No labels, just madness.

As artists became frequent flyers, the artworld became bicoastal. At the same time I was going to graduate school and studying photography in great detail. All of us in school were anxious to break out and have shows and start our careers. Wayne saw my vision and gave me a show. It helped that I was a fan of punk rock, I think. But it was interesting because Wayne was so conservative while his brother was so outrageous. He was proud of him, none the less.

In my earlier blog talking about TICE, George and I shared a few words recently in Maine. I told him how we spoke and met him at the Witkin Gallery during his show. What I completely forgot until now, is that I photographed Witkin and created art out of his likeness. Lo, and behold, like a piece of buried treasure I found the original Polaroid I did of Lee. Interesting how people used to do portraits in different ways and of course mine had to be electronically manipulated. So the forces of the universe collide people and materials, ideas and thoughts and collective thinking breeds similar but different approaches to the same thing. Music and Art always synergized in New York during those passionate years of the '70s and '80s. It was truly an artistic "shining moment" in ART. 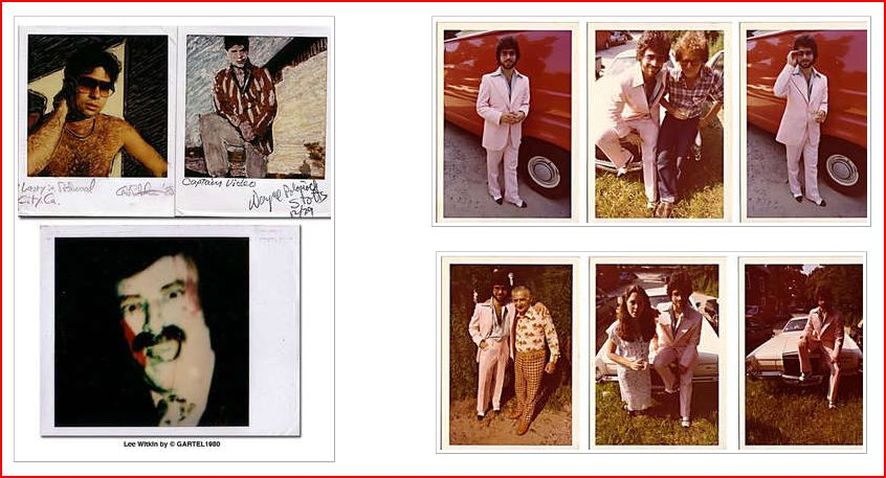 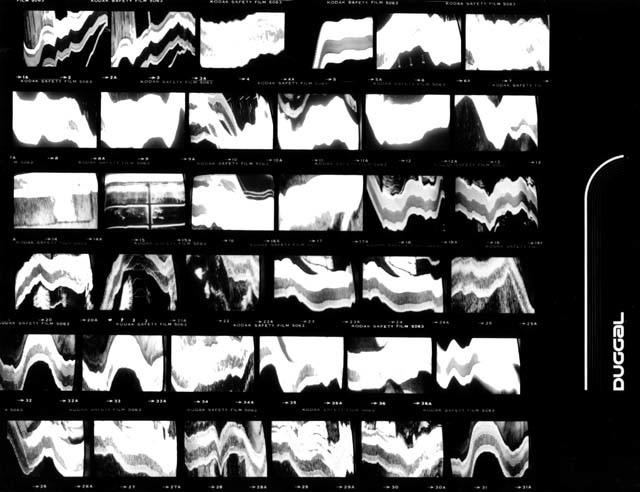 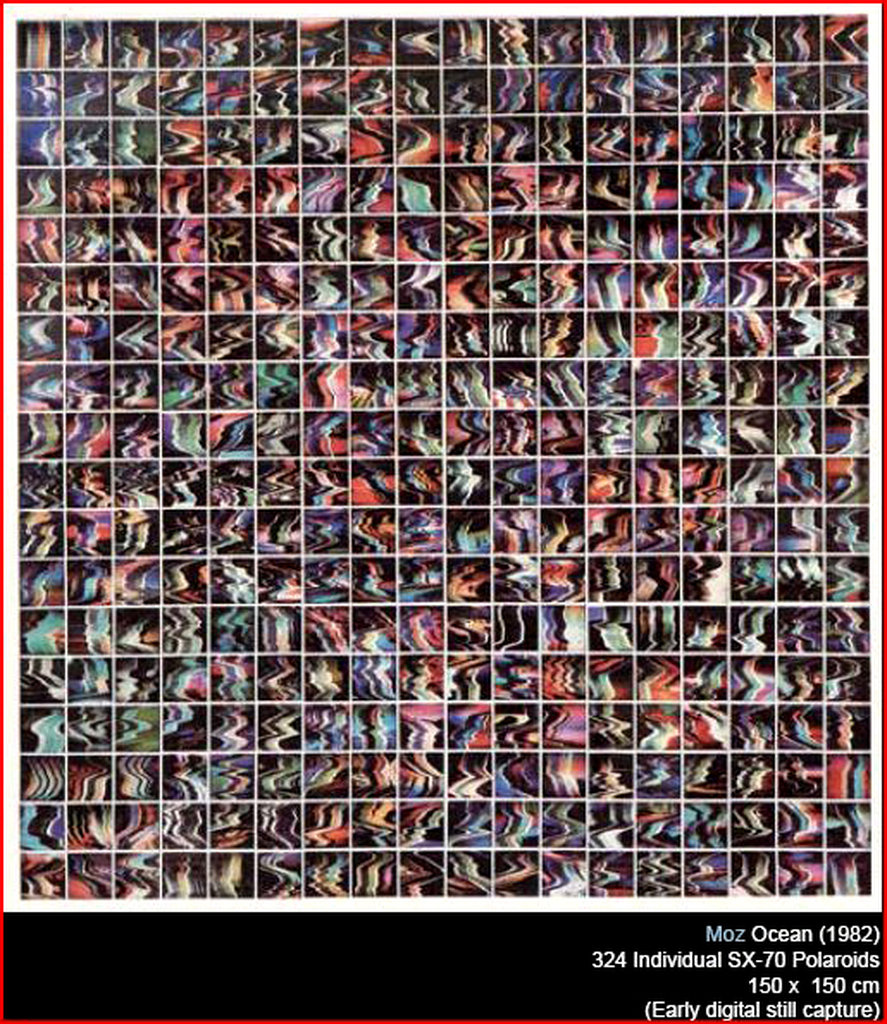