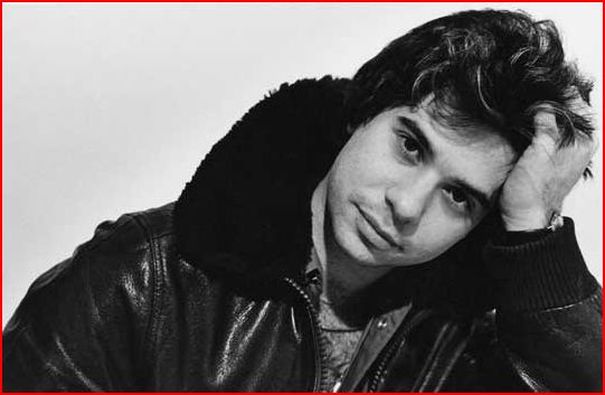 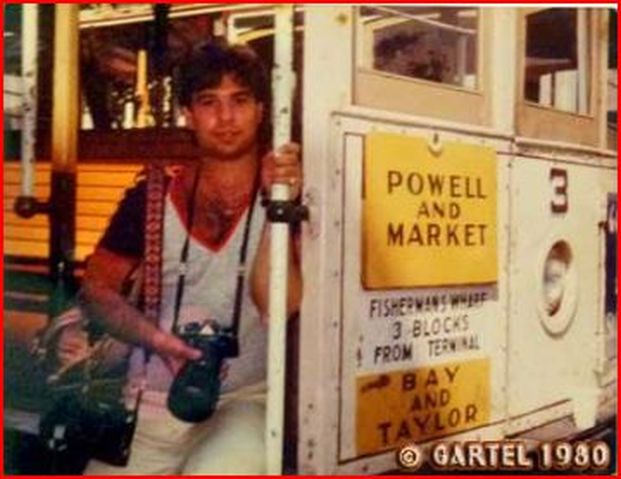 It's been a real journey, that's for sure. When I started creating digital art there were no personal computers or hard drives, no commercial software programs, no scanners and no digital cameras. I had to invent some of the analog systems that allowed me to manipulate images through various devices, mostly using wires and knobs. One would tweak an image through its various gray values and then strip color into that gray value, mixing red, green and blue. The fleeting image had to be photographed off the screen with a still camera on a tripod (what a difference thirty years makes). In doing so, the expression, "making lemonade out of lemons" is indeed appropriate. One had to be skilful in manipulating the hardware in order to produce anything. Then the aesthetic had to be there, as in "will this interest someone or not?" "Is the image arresting?" "Is it thought provoking?"

There were a lot of variables in the early days. But indeed, my dear colleague Nam June Paik taught me to think outside the box, and push the limits on what may not have been there before. Create something new and unique was always the goal. Alas, our whole society today is all technology based. It is part of our daily world. Back in 1975 life was quite different. No internet. No immediate correspondence beyond the telephone. Information and its access were quite limited. You had to rely strictly on your imagination being in complete real time. Today when you forget something you "type it into a search engine" and immediately retrieve the answer. What the internet has done is create a very competitive world, as well as opening up opportunities. We are still dealing with the ramifications of all this. Whether email correspondences are meaningful or not? Are they too informal in a not so friendly world? When sending Jpegs of art, do they hold any value? --Excerpt from "Digital Dynamic" written by Laurence Gartel, September 2007, Courtesy School Arts Magazine. 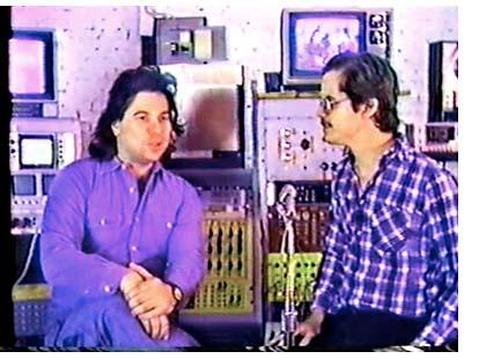 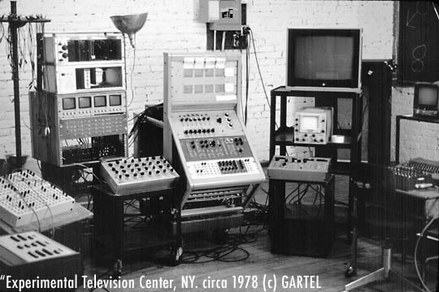 In 1978 I had gone up to Binghamton to use the second computer system to generate art. E.T.C. was funded by the National Endowment for the Arts and the New York State Council on the Arts. There I created some still life, set up pieces. Large scale studio video cameras were trained on the imagery. The combination of video cameras with manipulating dials using a variety of knobs helped to create the images. The resultant work was photographed with a still camera on a tripod. Thus you can see the scan lines in the work. They act as texture to the picture. These images then are the very first impressions at Experimental Television Center.

It is now 30 years since these works were created and I will be heading back there to create on the very same dials I manipulated as a young artist. It will be interesting to create "new work" on "old systems." Then again I very well may run new work through the electronics of old mechanisms. Wow. How exciting. I am looking forward to coming back 30 years later. Amazing. 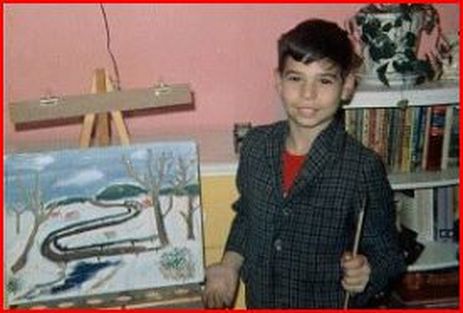 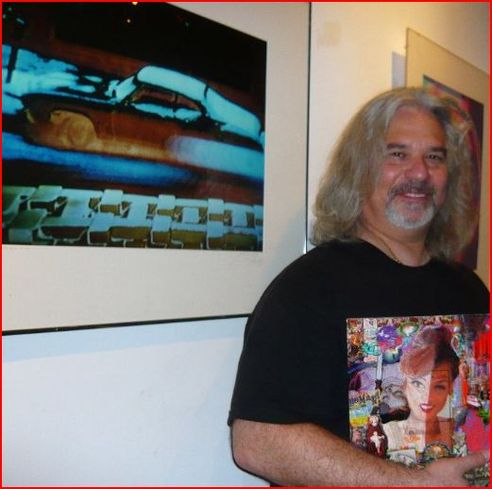 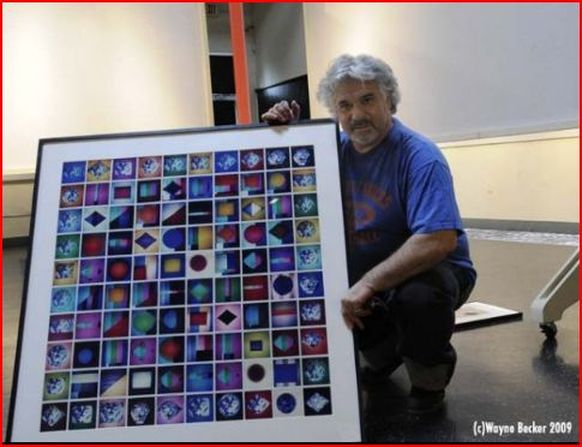 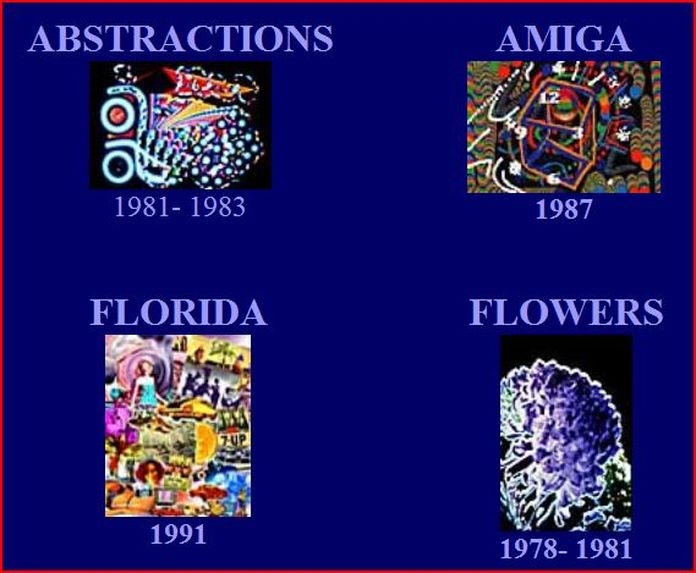 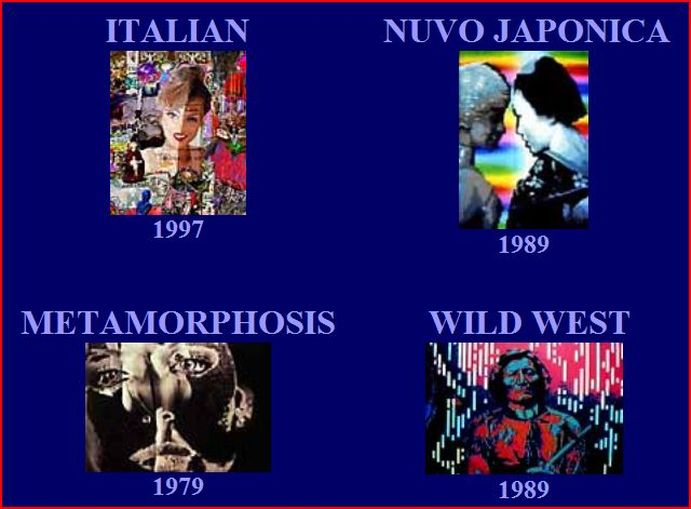 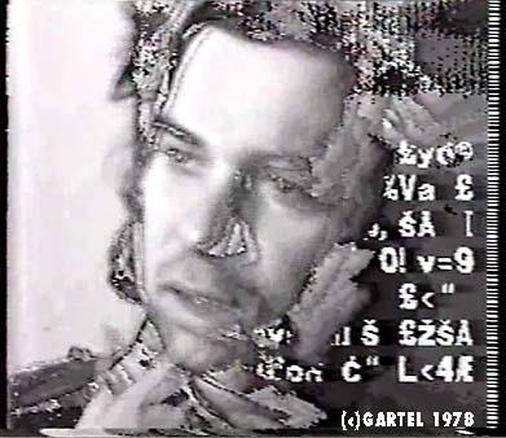 The Maestro from the 1978 Digital Video, Collection of the Victoria and Albert (V&A) Museum. - Impossible to create this image again. 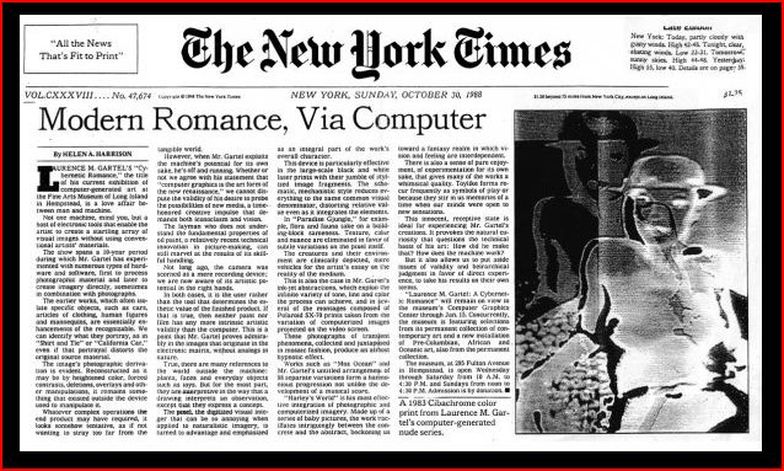 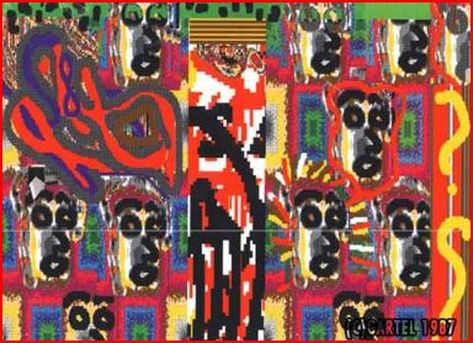 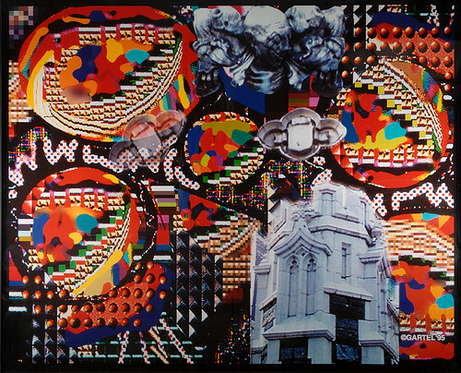 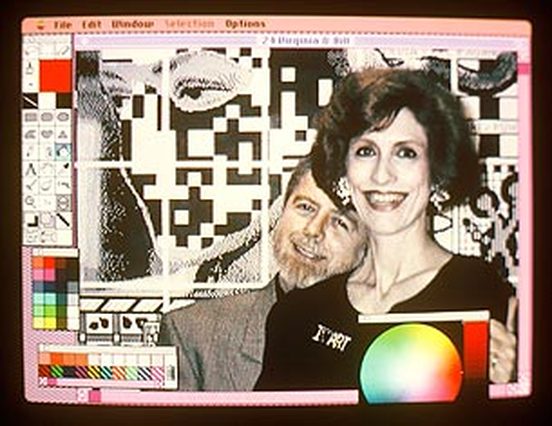 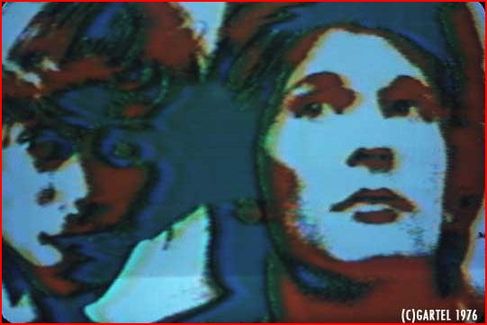 "DEVIN" © GARTEL 1976. - COMPUTER ART from "33-Years Ago." - Who knew back then what an impact it would make on the rest of the world?
See it during ART BASEL MIAMI BEACH at the National Hotel December 3rd from 8PM-Midnight.2009 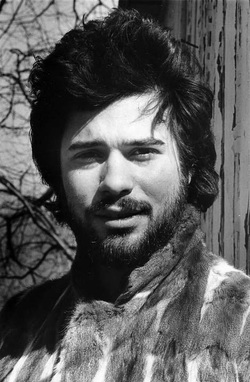 The Importance of a Picture

As the ART BLOG is supposed to document my entire art career, its people, places and activities, going through the archives incredible specimens have been found. If not found now..then when? You know life passes so quickly and time moves so fast, that who would ever come across anything and know the true answers or stories behind them? What? Get an expert to tell you? An authority? Who is really out there? Gone are the days of experts, particularly in contemporary culture.

Sadly, I have not found one person who really knows the true story of Pop Culture in New York City during the 70s and 80s at the very height when radical music and art collided. Could it be that everyone is dead?? Yes. That very well may be the answer. There are just a few people like Yvonne over at Max's Kansas City that know the real stories, or at very least her girlfriend Genya Ravan who wrote many in her book, "Lollipop Lounge" published by Billboard Books. This blog is not a write up of the punk rock era but a fusion of all things combined at that very time in 1980. What was going on came colliding from all fronts. Art in New York. It was so powerful. It was so viseral and it was so THERE. Sorry to say, but nice galleries with fancy one way glass is not the way of true art. No. Art in New York has gone the way of everything else in a corporate manner. Art in earlier times was mean, tough, angry, aggressive and full of passion. Art today is cool, slick, and lacks substance. It is as if art took a pill and went to sleep. 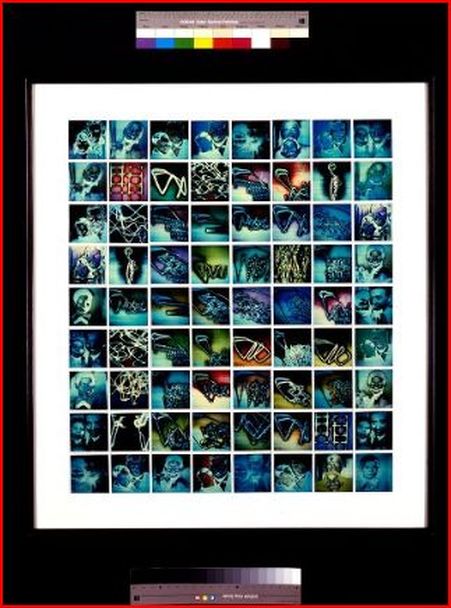 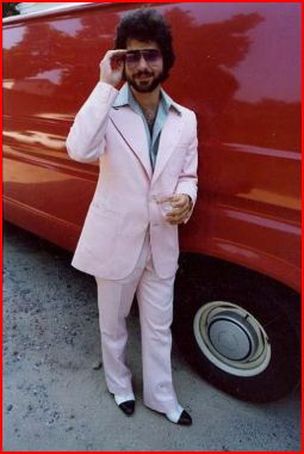 So here we are with this blog discussing the Polaroid photographs that have been manipulated on this page. One is by an artist Alan Plotkin (and I can see Alan in a white shirt in my mind's eye. A tall skinny guy with a decent sense of humor.) Alan who was out in California on a gig that was corporate admired my work and how I was a "real" artist vs someone trying to make a living doing other things. This has always been the case through and through. Never to sell out, and always make great art in my own style and where my own heart has taken me. In creating this autobiography it is interesting to see the who, what and where the artist has gone. I was 24 at the time when I first headed out to California. I went to use the Ampex AVA system to make the first high resolution markings on a serious computer system. In order to do that I had to get myself out to California first. There was a company called Image Works and they were looking for photographers. I figured it was the best way to get to Redwood City where Ampex Corporation was, and so I agreed to go out for the interview. There I met my friend Michael Stern (whom I remained friends with every since) and Alan Plotkin. I recall Alan being a great juggler as well. Good guy to bring to a party.

The seond Polaroid titled, "Captain Video" was made by Wayne Stotts and the image is dated 12/79. Wayne owned a gallery which he opened in Pt. Washington by the water. It was an absolutely gorgeous location. I can recall the coat I was wearing (I could probably get one arm into it now..) but my dad bought me that reversible coat at Saks Fifth Avenue's Men's Fur Department. It was a jacket made out of "Flying Squirrel." I never saw a squirrel fly, but that is what they called it. Wayne must have liked my coat as well, otherwise he would have never have worked on the picture. Polaroids were "worked" on at the time. People manipulated the emulsion and moved it around and almost painted with it in a way. But they would use all sorts of sticks and tools to get certain textures and techniques to the image. It was truly one of the first ways to alter a picture in an expedient manner. Little artworks in a 4" x 4" format.

But the image was only one part of the story regarding Wayne. Who was Wayne anyway? For curiosity sake, I just looked up Wayne on the internet and there he was: A graduate from one of my schools SUNY at Buffalo, Wayne continues to be part of the computer business. I think he was a business man in this field even all the way back to 1979. (Gosh..how old could Wayne be? ) I guess we have all been working a long time. As it turns out, Wayne's brother Richie was the lead guitarist for Wendy O' William's group the Plasmatics. Richie was the 6'6' guy cross dressed in a nurses outfit along with a shaved head and a yellow mohawk. (It was so bright you just cant call it blonde.) And speaking of which nobody called it cross dressing either. It was just outrageous and cool. No labels, just madness.

While planes fly in the air, going back and forth, so was the art world. At the same time I was going to graduate school and studying photography in great detail. All of us in school were anxious to break out and have shows and start our careers. Wayne saw my vision and gave me a show. It helped that I was a fan of punk rock I think. But it was interesting because Wayne was so conservative while his brother was so outrageous. He was proud of him none the less.

In my earlier blog talking about TICE, George and I shared a few words recently in Maine. I told him how we spoke and met him at the Witkin Gallery during his show. What I completely forgot until now, is that I photographed Witkin and created art out of his likeness. Low and behold, like a piece of buried treasure I found the original Polaroid I did of Lee. Interesting how people used to do portraits in different ways and of course mine had to be electronically manipulated. So the forces of the universe collide people and materials, ideas and thoughts and collective thinking breeds similar but different approaches to the same thing. Music and Art always synergized in New York during those passionate years of the 70s and 80s. It was truly an artistic "shining moment" in ART. - I am going to contact Wayne after this holiday weekend. 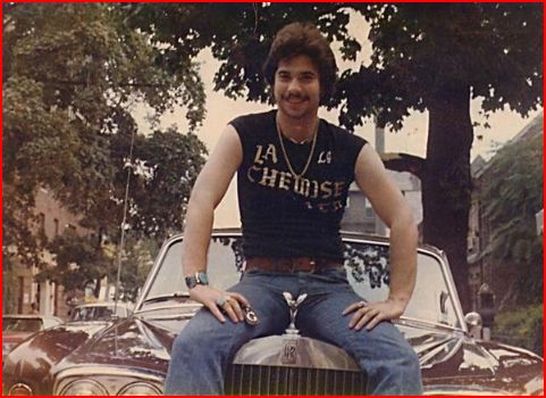 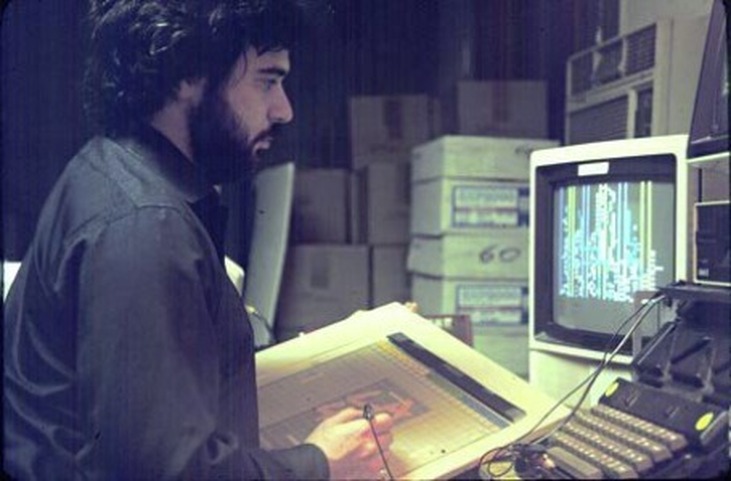 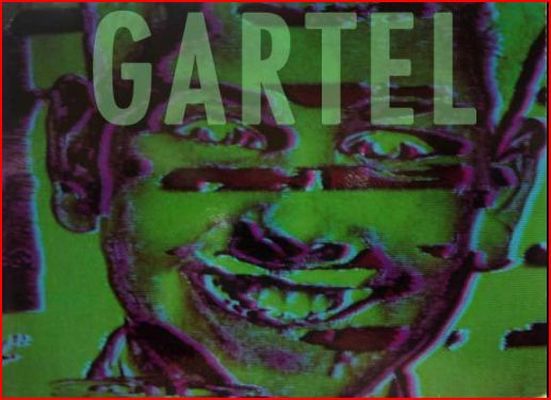 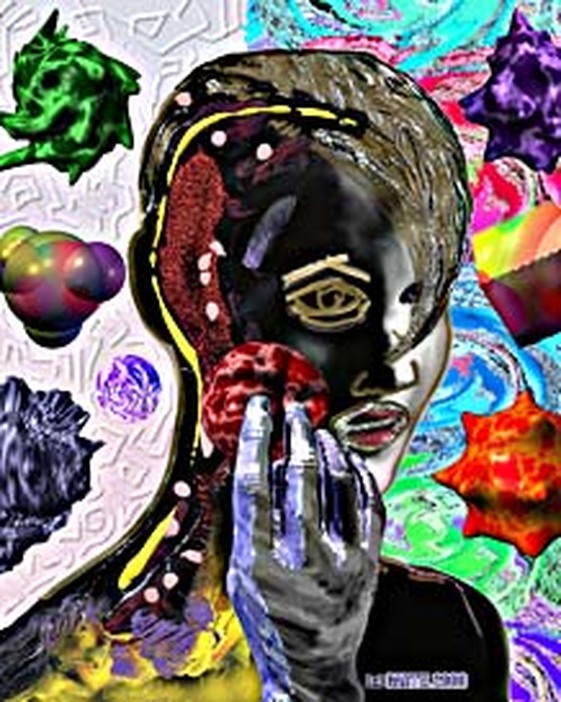 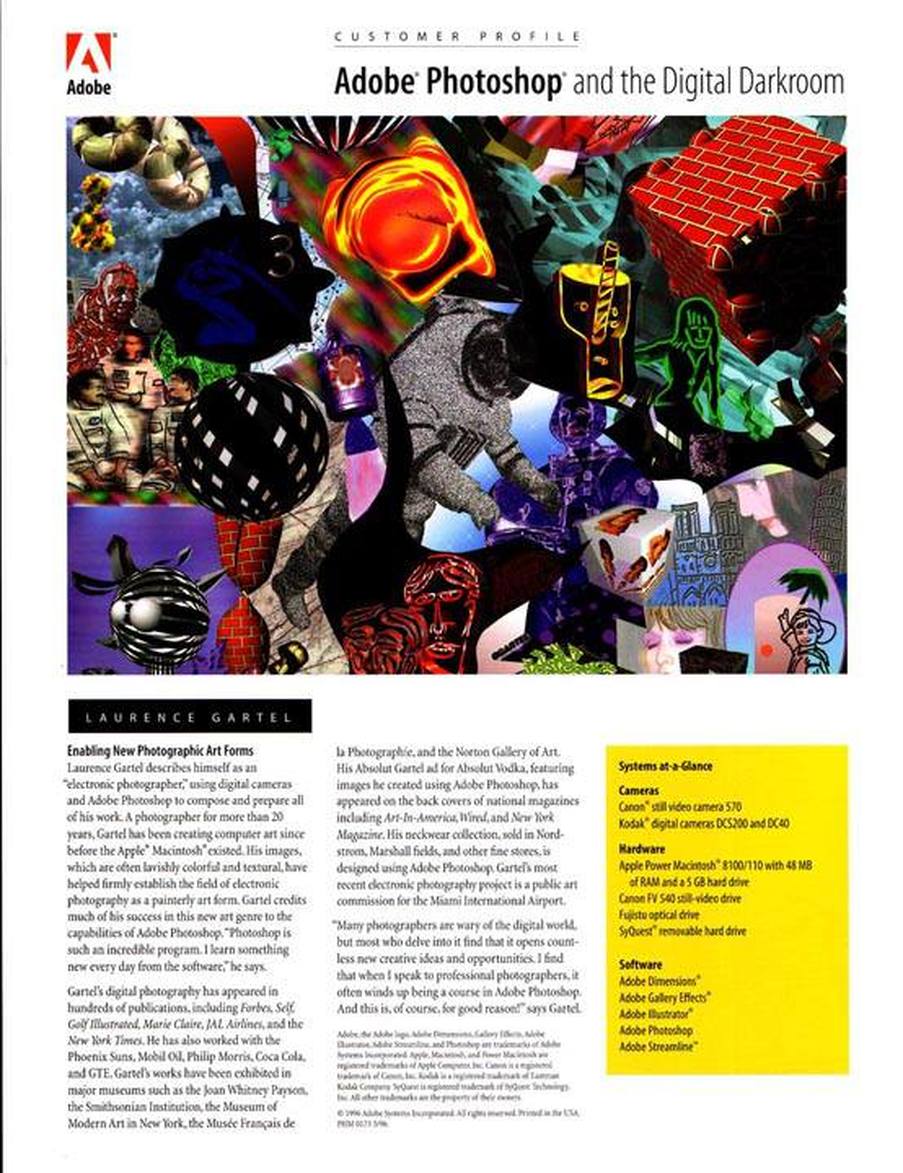